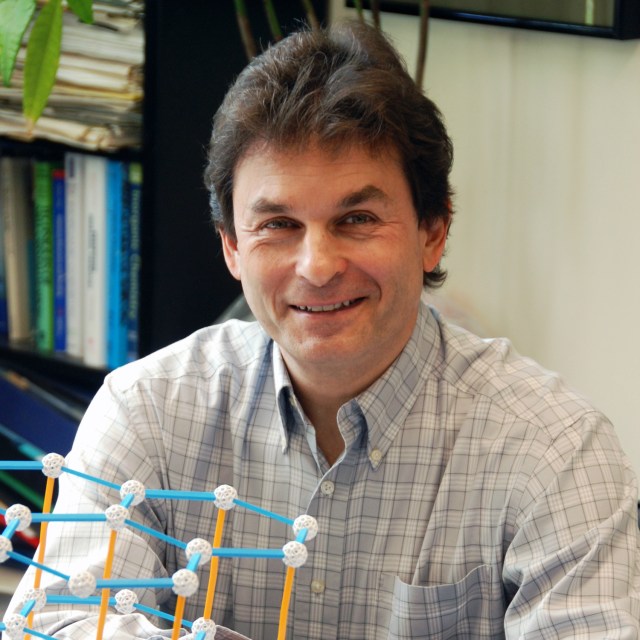 In his research at UCLA, Professor Richard B. Kaner focuses on the design of novel materials and their synthesis by new chemical methods. Dr. Kaner has been continuously honored for his outstanding contributions to the fields of chemistry and biochemistry. He holds over 16 U.S. patents—with 20 more pending–and has published more than 275 papers in major peer-reviewed journals. He was recently named as a fellow of the Royal Society of Chemistry and is the recipient of numerous other awards, including Fulbright, Guggenheim, Alfred P. Sloan, and David and Lucile Packard fellowships, as well as premier awards from the American Chemical Society, a National Science Foundation Presidential Young Investigator Award, and UCLA’s Distinguished Teaching Award. Dr. Kaner holds a joint appointment in the Department of Chemistry & Biochemistry as well as the Department of Materials Science & Engineering at the University of California, Los Angeles (UCLA). A graduate of Brown University, he received his Ph.D. in inorganic chemistry from the University of Pennsylvania in 1984. After carrying out postdoctoral research at the University of California, Berkeley, he joined UCLA in 1987 as an Assistant Professor. He was promoted to Associate Professor with tenure in 1991, Full Professor in 1993, and Distinguished Professor in 2012.Other awards include:
‍
-Most Cited Author, Institute for Scientific Information (2014)
-UCLA Faculty Lecturer (2013)
-ACS Award in the Chemistry of Materials (2012)
-ACS Tolman Medal (2010)
-UCLA Gold Shield Faculty Prize (2002-2004)
-Eka-Granules Lecturer University of Tasmania
-Visiting Professor University of Wollongong
-American Chemical Society Buck Whitney Research Award
-Dreyfus Teacher-Scholar
-National Science Foundation Presidential Young Investigator
-American Association for the Advancement of Science Fellow
-Australian-American Fulbright Fellow
-American Chemical Society Exxon Fellowship in Solid State Chemistry