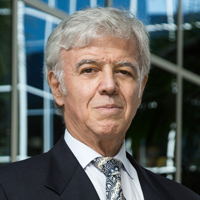 Board of Directors, Chairman

Dr. Kavanaugh has served as CEO and Chairman at a number of technology-driven startups, creating industry-leading products and investor profits. As founder, chairman and CEO of ZetaRx, Dr. Kavanaugh successfully combined exclusive technological licensing from top institutions to place ZetaRx at the leading edge of immunotherapy for the treatment of cancer; he assembled a well-seasoned team and guided the clinical strategy. In late 2013, ZetaRx was sold, becoming the core of Juno Therapeutics, which raised approximately $270 million and announced 88% clinical trial complete remission of terminal cancer patients. Prior to ZetaRX, he served as Chairman of Calhoun, a biotech firm that developed the world’s only light adjustable intraocular lens for cataract surgery. It’s industry-leading product has been approved in Mexico and Europe (with a CE Mark) and is in FDA late Stage III clinical trials in the U.S. Dr. Kavanaugh played a pivotal role in assisting commercialization abroad, and he continues his involvement with the company as a consultant.In 1996, Dr. Kavanaugh founded Amerident, a health care service provider, serving as Chairman and CEO. Under his tenure, the company organically grew its employee-ranks to over 600 by 1999, when it was sold to a public company. Amerident received over 30 community service awards and a state congressional medal of honor for its work with infants. As founder, Chairman and CEO of Team Global, Dr. Kavanaugh was responsible for taking the company public, helping guide and create value as the public share price rose from an initial investor cost of 11 cents per share to approximately $27 per share. Dr. Kavanaugh has also served as a member of the board of PreCash, where he is still an active consultant. In 2001, his efforts helped staved off an imminent insolvency proceeding, and lead to a major turn around. Two years later, PreCash was rated by Inc. Magazine as one of the fastest growing companies in profits in the United States. PreCash saw approximately $3 billion in transaction volume last year. He is also a member of the board of Materia, a company that holds more than 300 patents and is instrumental in the production of over 100 pharmaceutical products.